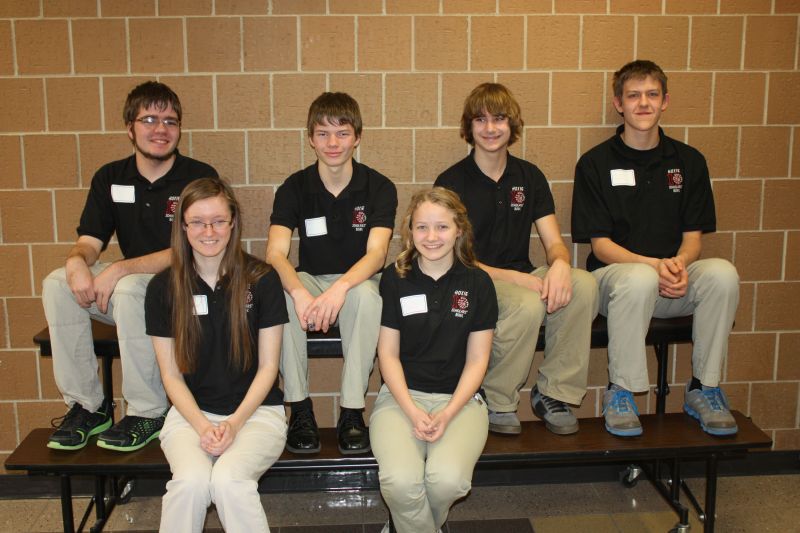 The Hoxie High School Scholars Bowl team traveled to Quinter for the Division I Regional Scholars’ Bowl Tournament on Feb. 6.The team consists of one senior- Quenton Rucker, one junior- Lisa Stone, one sophomore- Tabor Rucker, and three freshmen- Jacob Munk, Grant Johnson, and Noah Smith. The team was looking to qualify for State Scholars Bowl.Only the top three teams would advance.

The competition was round-robin made up with nine teams: Deerfield, Jetmore, Kensington, LaCrosse, Osborne, Quinter, Stockton, Victoria, and Hoxie.Hoxie ended the rounds of competition with five wins and three losses to Stockton, Kensington, and Jetmore.Quenton Rucker was the high scorer with 110 points, Tabor Rucker came in second with 50 points, and Jacob Munk in third with 40 points.At the conclusion of the round robin, Kensington and Stockton tied with six wins and Hoxie and Quinter tied with five wins.According to KSHSAA rules, ties are broken by determining which team won by points during the round placing Kensington in first, Stockton in second, and Hoxie in third.Therefore, Hoxie was heading for State.

The State Tournament was held Feb. 15 at Satanta High School.It was a 1A Division 1 championship tournament.The Opening Ceremony followed registration and lunch.The tournament was pool play with eight rounds, three byes, and a final five-round round-robin with the top three teams from both pools.Hoxie’s team consisted of Quenton Rucker, Lisa Stone, Tabor Rucker, Jacob Munk, Grant Johnson, and Skyler Denio, freshman.Hoxie’s matches were all low scoring, from both sides.Again, Quenton Rucker was the high scorer with 50 points, Tabor Rucker with 20 points, and Jacob Munk with 10 points. The team won one out of five rounds not qualifying them for the finals.

“I’m glad I have had the opportunity to work with this group of students.I couldn’t ask for a better bunch.Placing third at the Regional tournament and advancing to State was a great achievement.Even though we didn’t place at State, it’s not something to complain about.I’m proud of them for giving their all,” said Scholars’ Bowl coach, Jackie Campbell.