Picture: ​Skyler Denio, Brynn Niblock and Taylore Schamberger smile for the camera after presenting their FFA speeches at Quinter. 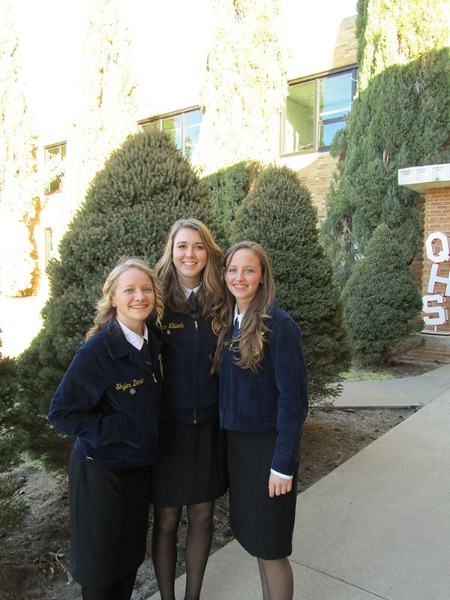 On Dec. 2 , junior Taylore Schmberger, and sophomores Brynn Niblock and Skyler Denio competed in the District FFA Speech CDE (Career Development Event, usually referred to as contests) in Quinter.  They were accompanied by their Advisor Krista Mauck, who had helped them prepare for that contest.  During this speech contest competitors are placed into divisions based on grade level.

This was the first time at the speech contest for all of them.  Taylore (Division III) talked about the Clean Water Act, how it affects farmers, and #DitchTheRule.  This earned her sixth place in her division.  Brynn (Division II) gave a speech on PETA and how slaughter is an ethical practice and she received seventh place.  Skyler (Division II) discussed the questionable production of the drug Premarin, which is made from the urine of pregnant mares.  She also was awarded sixth place of her division.

The Hoxie FFA Chapter frequently posts news and updates on the Facebook page, Hoxie FFA. Like our “page” on Facebook to stay up-to-date with the latest Hoxie FFA news.