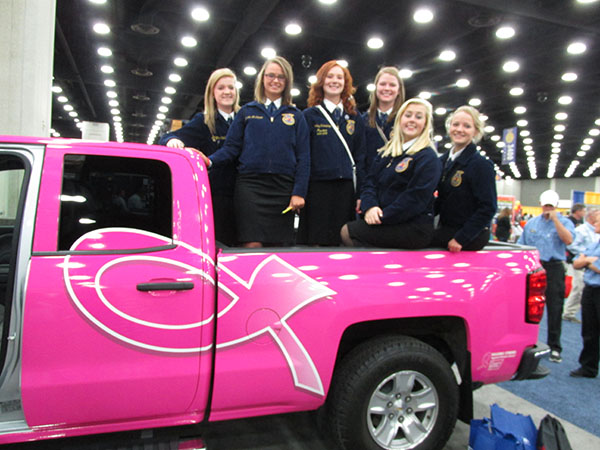 On the morning of Tuesday, Oct. 28, six Hoxie FFA members traveled to Louisville, Kentucky.  To attend the 87th National FFA Convention.  It was a record setting year; 64,409 members and registered guest were in attendance.  These six students were freshmen Cami Schamberger and Jacelyn White, sophomores Devynn Snyder, Kaylyn Weems, and Skyler Denio, and FFA Advisor Krista Mauck and Wendy Schieferecke.  They returned to Hoxie on Nov. 1.

During the trip, they did plenty of sightseeing.  While on the road, they stopped at National Landmark Marengo Cave in the state of Indiana.  In Louisville, they toured the Churchill Downs and the Louisville Slugger Factory.  On the way home they went up the St. Louis Arch and visited Purina Farms and Event Center.  At the time, a dog show was going on, where the group realized they were significantly underdressed.

At the convention, the students attended the opening session and second general session.  During the opening session, they listened to keynote speaker Nick Vujicic.  The general session consisted of chapter awards and a retiring address from National Officer Steven Brockshus.  While still at the convention venue, they walked through the Career Show and FFA Mall, and listened to the FFA Talent Show.  They also attended a rodeo and Danielle Bradbery and Scotty McCreery Concert strictly for FFA members attending the convention.  The students say that the trip was a learning, building, fulfilling, and over-all wonderful trip that they’ll likely never forget.